Hurry up to book a viewing: March availabilities are live!
Are you an owner? Talk to us about rent optimisation!
Check out cool video about flatsharing on YouTube!
(+352) 691 455 551

Our latest Information, Tips and News

What language is spoken in Luxembourg? Cultural and linguistic guide 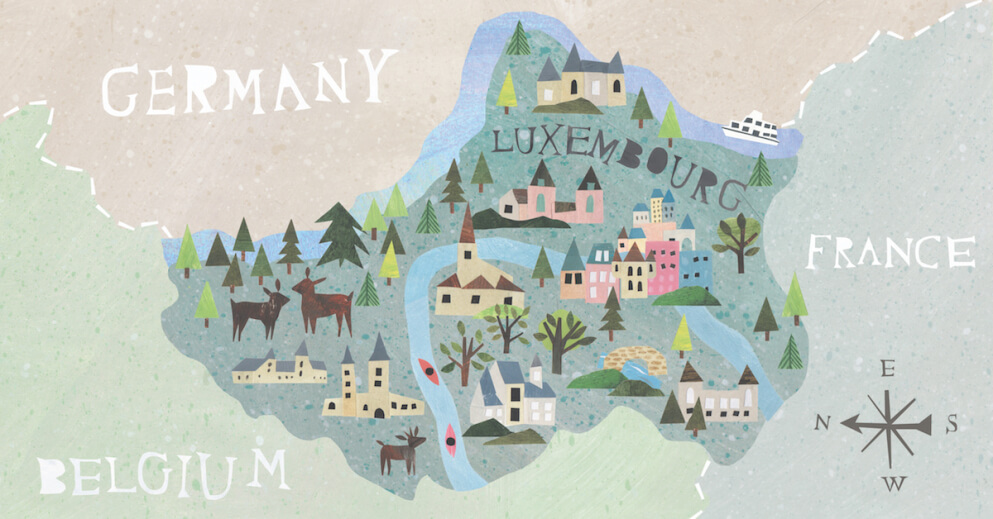 If you are thinking of relocating to Luxembourg for business or perhaps you just need a change altogether and are attracted by the Grand Duchy’s high quality of life, there are a few things you should consider first.

You definitely need to know that this is a very diverse country in terms of demographics, culture and language. There are 3 major spoken languages besides English:

Now that you know what to expect in terms of spoken languages let’s talk about culture.

Luxembourg City features very good museums that are really popular and each year during the ‘Night of the Museums’ (in November) all 7 main city museums are open till late into the night and attract huge crowds. Luxembourg City is incredibly diverse, the seat of the EU law courts and blends both ultra modern with old traditions. It has a cultural legacy and history that stretches back over 1000 years and features the breath-taking Wenzel’s walk, which is also on the Unesco World Heritage list. Its architectural legacy goes back to Celtic, tribal times although the city itself was most likely founded by the Romans. Formerly known as ‘Gibraltar of the North’ as it was considered to be the most significant fortified city in Northern Europe, make sure that you do not miss out on visiting the breath-taking fortified Pétrusse valley that cuts the city into 2 big halves. With ramparts of nearly 50m height it is a sight to behold and perfect for romantic walks along the river. You might even encounter ‘Melusina’, the mythical Mermaid that disappeared centuries ago when according to legend count Sigfried, the mythology founder of Luxembourg city, spied through a keyhole while she was bathing.

Outside of Luxembourg city, if you have any time left, you should not miss the Vianden Castle, the Echternach Basilica or the so-called Müllertal. If you are a painted art lover, you can find beautiful works by Jean-Baptiste Fresez and Nicolas Liez. They are the most important artists of the country and also painted the City of Luxembourg and its surroundings in the late 19th century.

Checking out the local libraries where you can delight yourself with some of Edmond de la Fontaine’s poetry who is considered to be the country’s outstanding national poet, being one of the first to write in Luxembourgish.

As far as national cuisine goes, it is strongly influenced by the German and French cooking, as well as Portuguese and Italian expats who arrived in the 50s and 60s. Eating out is somewhat of a national sport in the capital and there is a very high density of restaurants to choose from. This will be an enriching experience! Either way, you will most certainly enjoy what this country and its people have to offer.

Our services for owners

You can easily make more money renting out your property

It's always safe to rent your apartment with our service

We offer flexibility to suit your needs

For all your properties

So you can focus on things that really matter

References from our clients

‘Moved to Luxembourg 3 years ago and had a great experience thanks to this agency. Made lifelong friends due to the thorough checks of flatmates and recommend this agency without any reservations.’

‘Rented a room for 1,5 years. Professional and prompt service, happy that we had a cleaning lady as well. Spacious room and great location for professionals working in Kirchberg. Thanks again!’

‘I have been with Vauban & Fort for almost 3 years and these guys are very good at keeping their customers happy, very responsive and just overall great experience!‘

‘ have been staying in a flat of Vauban & Fort for more than two years and I didn’t have any issues throughout this period. They are professional, friendly, reliable and caring. They are always there and responsive in case we need any help. I’m really glad that I rented with them.’

‘I stayed in One of their very well located houses for more than a year and i had a really positive experience. Full and professional support from the team.
After my stay the guarantee was sent back to me in hours’

‘Great flat, and flatmates ! Agency very quick, I got my deposit back without any delay.’

‘Great and reliable agency, very nice and tidy accommodation, they really care about their tenants and the environment in their flats. I can say only the best about my stay. I would recommend them to everyone! :)’

‘Great flat (new and clean), great flatmates and got my deposit back without delay and problems.’

‘Good experience with nice flatmates! Reactive and they send me back my deposit within 2 days.’

‘Stayed in the flat located at rue Fort Wallis for a year. Nice room in a big apartment. Agency is quick to reply to any potential issues and got my full deposit back within a week.’

‘Highly recommended! The room was fantastic, and the staff were always nice, responsive and made everything easy. Also the deposit refund was fast, which is quite appreciated.’

‘Luxembourg rental market is well known for its frenzied nature. These guys offer a simple all-inclusive package in great locations. They rent to professionals only and they are always available to help. Highly Recommended from my side.
Also, the deposit refund process was fast and without any hassles.’

‘Very responsive and efficient!. Helpful even from distance. They return the deposit really quick’

‘The agency is quick, actually even too quick, you can ask for help about something and it can be solved in an hour. They are very responsive, safe, friendly and helpful.

‘I had a great experience with Vauban&Fort. I stayed in a nice shared flat in Limpertsberg for almost an year. They were always very nice, reliable and helpful in any respect. My flatmates were great. I really felt like home! Thank you guys!’

‘Responsive, accommodating and friendly, very happy with the condition of the flat’

‘Best place to live when looking for a nice accomodation. Fair offer more than decent price. They were always helpful and they return the deposit really quickly! Highly recommended’

‘Had an opportunity to stay at the appartment located at Rue du Fort Wallis for some time. Vauban&Fort is very responsive, reachable outside working hours, helpful in solving any issues. Also I was happy with the condition and location of the flat as well as the flatmates with whom I lived.’

I moved in to my new home a week ago. I just moved to Luxembourg and Vauban & Fort was really helpful even from a distance. So that I’ve rent the room before I arrive and could move in immediately upon my arrival. The apartment is in a nice area and it’s in good condition too. Flatmates are also very nice and we get along really well, even hang out all together.

‘Best service ever! I moved in Luxembourg in January but I had a hard time finding an accomodation till I meet Vauban&Fort. They really helped me finding the right flat with the perfect flatmates! warmly suggested to everyone who’s moving to Lux!!’

‘Reliable and full level of assistance. Before moving in they helped me with a “Skype” visit of the apartment as I was not located in Luxembourg. During my stay they were available for any assistance and I received the deposit money back in just 2 working days after I left. Definitely excellent service.’

‘Coming to live in Luxembourg for the first time, Vauban&Fort saved me a lot of effort and helped me find an accommodation before my arrival. They were cooperative, flexible and available on short notice. I also liked that my flatmates were carefully selected and were all friendly and respectful. I recommend the flats managed by Vauban&Fort, especially for those who come to Luxembourg for the first time. Great job, thanks.’

‘My accommodation in the flat was for 8 months. I am very satisfied. The house was perfect, very clean and comfortable. The other guys very friendly, professional and trustworthy. Vauban was very cooperative and easy to reach. Without doubt the best value for money in Luxembourg and in a great area to live.’

‘For a newcomer to Luxembourg, finding a suitable accomodation can be a lengthy and challenging task, as it is less accepted than in other cities. Thankfully Vauban&Fort’s experience in the process makes things a lot easier. They take care of all the aspects related to the flat, becoming a guichet unique to solve any issues, and I unequivoqually recommend their services.Thanks!

‘I arrived initially for 1 year in Luxembourg and as it’s hard to find a flat, Vauban + Fort helped me a lot to find a nice flat share really close to my job. The rental contract was clear, without bad surprised (sometimes there a strange requirements in Luxembourgish contract). My roommates are really nice and the ambiance is so international (Polish, Luxembourgish, Belgium). I recommend them any time.’

‘I lived in London for many years before my move to the Grand Duchy and appreciate the quality and cost efficiency of V&F. I was very positively surprised that Vauban offers very competitive prices and my deposit was lower than the monthly payment. I was just not very keen to pay the usual, high prices that are commonly asked in Luxembourg. Additionally I was pleased with the international and interesting people that I am sharing my flat with. I feel that the Vauban+Fort really made an effort to match the tenants.’

‘Thanks to Vauban+Fort I found my apartment in the centre of Luxembourg. It is in a perfect position of the city and most important thing: everything was new inside and perfectly functioning. What I really appreciate was the seeking of good people to mix in the apartment in order to obtain the best flat sharing as possible. I really appreciate the professionalism of Vauban+Fort and strongly recommend it.’

‘Luxembourg is a very difficult market to find a nice appartment. However, Vauban+Fort had an excellent selection of different housing possibilities, had grasped my needs very fast and showed in general a high-end customer related service.’

‘Living in a shared flat organized by Vauban + Fort has been a great experience. Our flat is centrally located between the city center and train station, the usage of public transportation is very comfortable and there was no need to use my car anymore. Many restaurants, supermakets, bars,… are in the disctrict reachable within 10 minutes by foot, so it’s a great place to enjoy the city life. The flat itself is very clean and bright and thanks to V+F I have found a new home.’