was a brilliant military engineer, whose vision, careful planning and strategic foresight transformed Luxembourg into the foremost fortification in Europe. Under him ‘Your home is your castle’ gained a completely new meaning as Luxembourg became known as ‘The Gibraltar of the North’. Our agency’s name is a homage to this inspirational character. 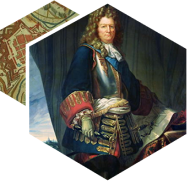 Sébastien Le Prestre de Vauban, Seigneur de Vauban and later Marquis de Vauban (1 or 4 May 1633 – 30 March 1707), commonly referred to as Vauban, was a Marshal of France and the foremost military engineer of his age. He is known for his skill in both designing fortifications and breaking through them.

He also advised Louis XIV and after the siege in 1683-1684, French troops regained the fortress under their renowned commander and military engineer. From 1684 to 1688, Vauban immediately started a massive re-building and expansion project for the fortifications, using more than 3,000 men. Advance fortifications were placed on the heights around the city: the crownwork on Niedergrünewald, the hornwork on Obergrünewald, the “Cornichon de Verlorenkost”, the Fort Bourbon and several redoubts. Vauban greatly expanded the military’s hold over the urban space by integrating Pfaffenthal into the defences, and large barracks were built on the Rham and Saint-Esprit plateaux.

Fort Vauban was one of the 29 Forts guarding Luxembourg city and the French military engineer helped to transform Luxembourg into the foremost fortification in Europe and in no small way turned Luxembourg city into the ‘Gibraltar of the North’.

Luxembourg took pride in the flattering historical epithet of the "Gibraltar of the North" as a result of its alleged impregnability. The fortifications were built gradually over nine centuries, from the city's foundation in 963 until 1867. By the end of the Renaissance, Luxembourg was already one of Europe's strongest fortresses, but it was the period of great construction in the 17th and 18th centuries that gave it its fearsome reputation. Due to its strategic location, it became caught up in Europe-wide conflicts between the major powers and underwent changes in ownership, sieges, and major alterations, as each new occupier—the Burgundians, French, Austrian and Spanish Habsburgs, and Prussians—made their own improvements and additions.

We have over 12 years of experience in flatshares for professionals in London, New York and Luxembourg. As an agency, we apply our expertise and know-how to ensure clients find the most suitable solution to rent a room in Luxembourg, a studio, or a shared house with other people.